Ah summer… the time of year when we relax a little bit and have some fun. I’ve definitely felt the need for some fun lately so I decided to try a few new things this summer to break myself out of a rut.

One recent Saturday morning, I woke up with visions of knitting under a big umbrella on a beach while salty waves washed ashore. An appropriately beachy yarn in a light seafoam color was just beckoning to be made into a hard-wearing beach bag. A few hours of Ravelry-perusing later, I decided on the Medano Beach pattern. I coupled in some Debbie Bliss cotton DK in cool grey to give it those fun stripes that are just so popular right now. 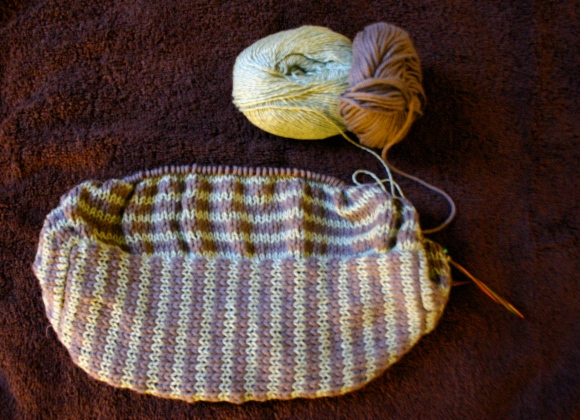 Following this inspirational wave to try new things, I wanted something that would be a bit of a challenge and keep me entertained. I also discovered that I’m really enjoying working with the thin Hempathy yarn, so I started thinking of light, airy shawls in laceweight yarn, which is something I’ve never worked with before. I fell in love with Brooklyn Tweed’s Rock Island Shawl, which is spectacularly lovely and word on the Ravelry forums is that it’s not exactly beginner’s lace. I picked up some lovely Anzula laceweight in the Seascape colorway and cast on for this just the other night. I haven’t gotten very far, but I think its going to be great.