Today Joey is in Paris. I always assumed that after having the opportunity to travel to some of these places myself, I’d be less jealous the next time he went without me. Apparently that is not the case and I find myself daydreaming of Paris. As my thoughts today are on this beautiful and still-magical seeming city, I thought I’d share my experience in Paris.

We traveled overnight from Amsterdam to Paris on the tour bus. I awoke in my bunk to a sliver of light coming in through the curtain and the sound of cars driving and honking. I peeked out the window and was eye level with a piece by the street artist, Space Invader on the side of a building. It momentarily brought me back to Brooklyn, where I would walk past another of his pieces on an almost daily basis. I woke Joey and we decided to stretch our legs and find out where the showers were.
It turned out we were parked outside the venue the band would be playing that evening and our tour manager was sorting out where everyone could get cleaned up, so Joey and I decided to take a stroll to find some coffee.
We didn’t have to walk very far before we found a patisserie and grabbed an espresso each, a slice of quiche, and an eclair to share. (When in Paris, right?) 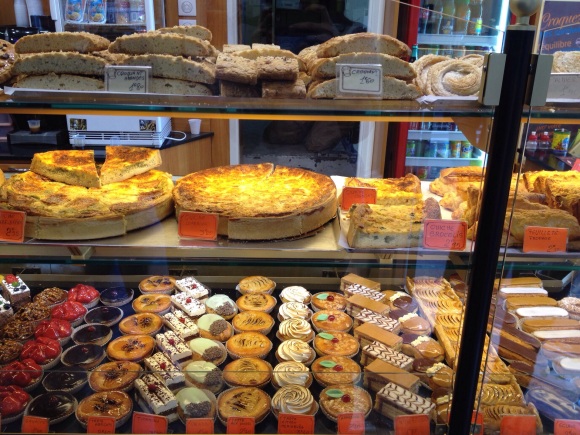 After breakfast and determining it would be a few more hours before our hotel room would be ready, we decided to take another little stroll around the area. It was during this walk that I discovered that Paris is much more hilly than Texas. We walked up and down cobblestone streets, past brick walls with moss growing along the cracks in the walls and past some of the most charming little apartments and I was already picturing what it would be like to live there. It was very windy and kept threatening to rain- we actually did get caught in the tiniest of cloudbursts before we headed back to the venue for sound check.

We had about an hour before dinner and I really wanted to see Sacré-Cœur, so we hopped on the metro towards Anvers. When we hopped off, we had lost our sense of direction and weren’t sure which direction to walk. We stopped at this corner flower shop and asked the kind old man “which way to Sacré-Cœur?” He did not speak English and I don’t speak French, so I just repeated “Sacré-Cœur?” in a questioning tone. He still didn’t quite understand what I was asking for, but fortunately a man standing nearby spoke English and translated for us. When he told the old man we were looking for Sacré-Cœur, the old man’s face brightened and said “oh, Sacré-Cœur” in the most beautiful French and proceeded to tell is to take the metro to Anvers. Grateful for the assistance and embarrassed that my Texas-accented attempt at pronouncing Sacré-Cœur sounded not even remotely recognizable to this kind man, we turned to go. I was still so confused. We just got off the metro at Anvers, so why would he be telling us to get back on? We walked a couple more blocks, thinking that like the NYC subway sometimes each stop has multiple entrances and exits, perhaps we exited at the wrong sortie. We came upon the next metro entrance and quickly realized we had gotten off at Avron, not Anvers. Silly Americans! We arrived at Anvers not too long afterwards and arrived at the steps to Sacré-Cœur just as the sun was setting. 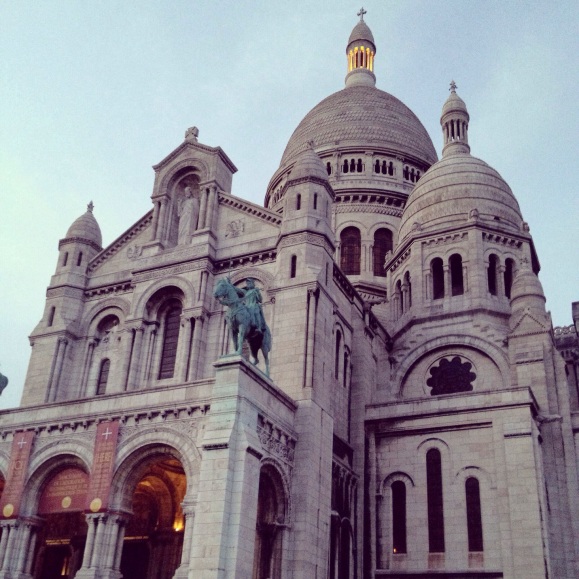 The show that night was a crowded and sweaty affair. The venue was way too small to hold the crowd that gathered and the air was thick with the heat and humidity from all those people crowded into a small room. The band sounded excellent and I spent part of the time watching from the small sound booth and then squeezing my way backstage to the tiniest upstairs green room with the most insane death-trap staircase/ladder that I’m not soon to forget. After the show, I could hear everyone milling about just outside the venue as cool crisp air wafted in the windows, a welcome refresher after the crowded show. 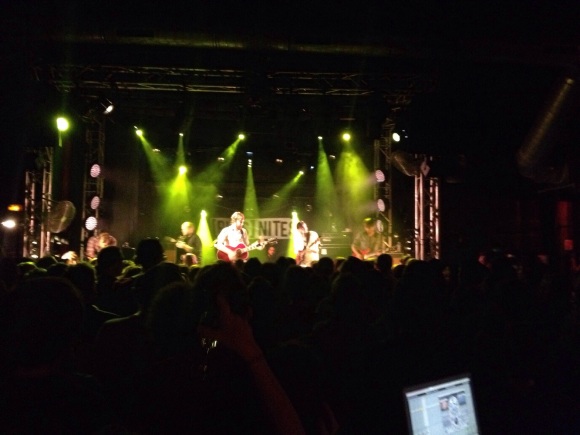 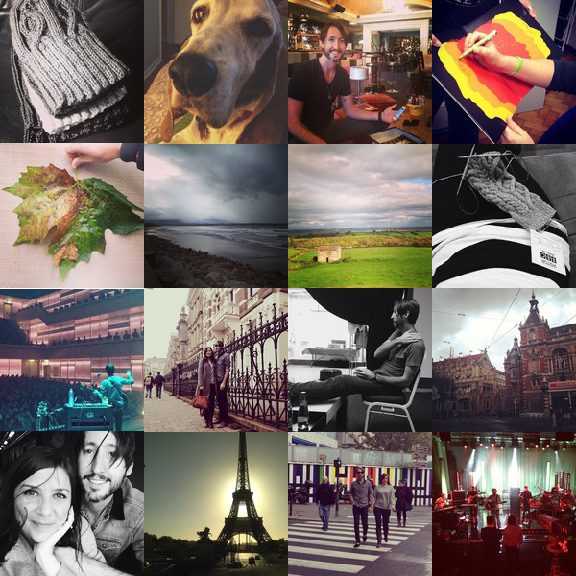 October was a really great month.  I always love it because the change in seasons feels fresh and exhilarating but also because its my wedding anniversary month.  I was feeling a little sad when I first realized months ago that Joey would be out on tour during our anniversary, but what better excuse for me to go on a trip to Europe than to celebrate 12 years of marriage with my love?  I spent 7 days traveling with the band on the tour bus and had the most amazing time.  Some of my favorite parts of the trip were just watching the guys doing their thing and playing some really wonderful music.  I squeezed in a bit of knitting backstage and on the bus (the knitting pic above was taken while sitting in the artist’s lounge at the BBC!), but I mostly just soaked up all the sights and enjoyed some quality time with Joey.

I just booked a trip to Europe and I’m leaving next week! My darling Joey is on tour for the next five weeks and will be away for our anniversary, so I’ve decided to go see him. I’ll be going to London, Ireland (Sligo), Amsterdam and Paris and my mind is buzzing with ideas on what knitting to bring. I have a hat on the needles and a small accessory design that I’m about halfway finished with, but is that ENOUGH? What if I can’t sleep on the plane and I knit my way through both of those and then I don’t have anything else to work on? What if I walk through TSA and they think I’m a lunatic because my suitcase contains more yarn than clothes? What if I map out all the yarn stores in every city on my itinerary just in case?

What knitting projects would you pack for a whirlwind trip to Europe?

Joey and I have amassed a collection of coffee mugs that tell a little story of our lives.  It wasn’t an intentional collection, but every time he leaves for a tour he comes back with a little something from whatever fabulous country or city he has visited, and the souvenirs that see the most use are always the mugs.  I have a few special ones in the collection too and I was noticing the other day how we tend to pick out certain mugs for each other, and that there may be little unspoken messages behind our selections. 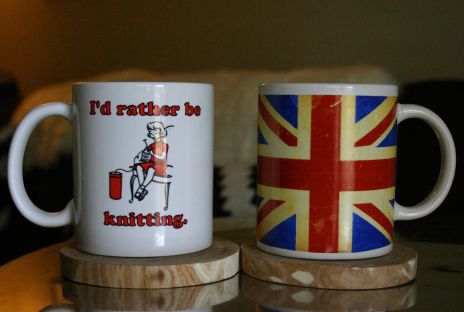 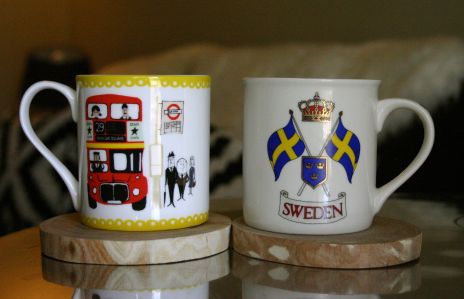 When I’m pouring the coffee I always think something along the lines of “oh he gets the Union Jack cause he’s going to London soon and I’ll take the knitting one because I plan to do tons of knitting today” or “I feel like tea and I’m going to drink it out of my London tea cup and since that one is little, Joey gets the little one from Sweden. He loves Sweden.” 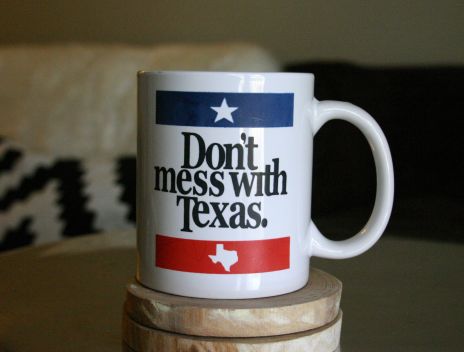 When he pours the coffee, he tends to make mine in the Love Is All You Knit mug and his in either the Amsterdam mug or maybe the Don’t Mess With Texas.  Sometimes he’ll bring me coffee in the little mug from Holland with the Dutch girl and boy leaning in for a kiss.  And when he is on tour, I tend to drink from a mug that is geographically close to wherever he is traveling.  Yes, there has been an “oh he’s in Spain, so I’m drinking from Barcelona today,” and I’ve even drank from his J- initial cup to feel extra close while he was away.

Our subconscious mug-selection habits may be a little silly, but one thing is for sure: our cups are always filled with love.